Voices from the Past, Messages for the Future 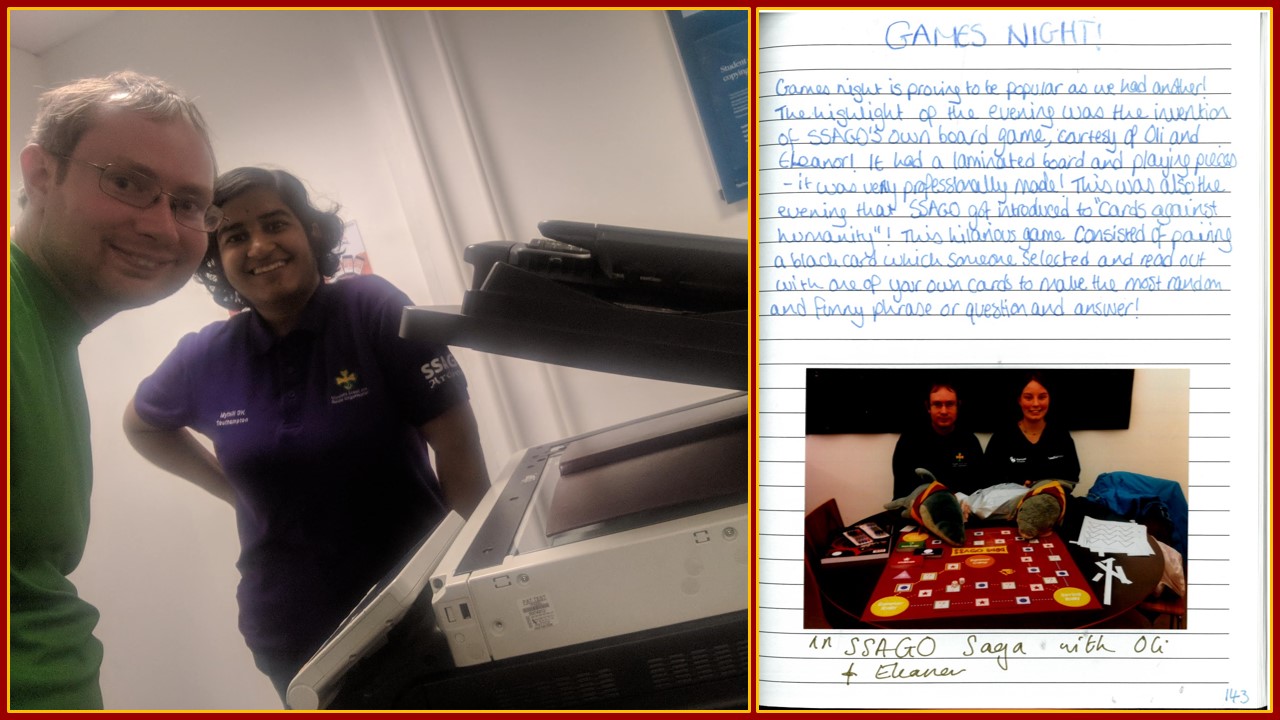 This is the story of how we accidentally found some holes in Southampton SSAGO's history and decided to fill them up. It is a story of how a conversation over lunch led to a bigger plan and of how we took the first steps to fulfill that plan. It is also a story of how a trip into the past influenced me personally and motivated me to work towards linking the past and the future with the present. This is a story about an amateur archivist who did her best to do her duty to the archive.

In December 2017, I took over as the archivist of Southampton SSAGO following a request from the rest of the committee. My main task was to bring our archive book back on track and up to date for that year. As with everything else in Scouting, that simple task grew into something much more.

The first thing I did was to visit our archives in Hartley library to get an idea of what I’d have to do. It was sheer chance that the books I picked as samples were from the 1960s. I opened the first one and was instantly transported to Southampton as it was more than fifty years ago. As the pages spoke of hikes, rallies and other adventures the little black-and-white photographs seemed to come alive and tell a story of their own – a story of how students in universities were drawn together by their links with Scouting and Guiding and how they worked and played together to keep the spirit of the movement alive wherever they went.

Two things struck me about those old archive books. The first was the level of detail. It felt as if every single thing had made it to the archive – from complicated sleeping arrangements (with diagrams) to a wait in the car park, from how much coffee was drunk to who was involved in making it. A quick skim through those books revealed many interesting facts. Coffee was apparently taken very seriously. The Scout and Guide club loved taking children for walks. Then, like now, the New forest was everyone’s favourite place for a walk or a hike. Talks and discussions with officials from Scouting and Guiding seem to have been quite common too and the archives are full of little booklets, cards and pamphlets from these. The rallies had interesting themes – one futuristic rally even focussed on the world in 2008!

The other thing that struck me was the way the archives had been written. It was not a mere collection of reports – each entry had been written in simple but elegant language in a very personal manner and packed with wit and humour. Some of the entries had even been written by multiple people, a paragraph at a time in turn. Together, the entries in the archive books spoke of many happy days with everything from the smallest coffee morning to the biggest birthday party celebrated in style.

The years rolled on and we’re now in 2018. The archive books however stopped at 2009. Everything in the archive had been classified and catalogued in great detail but nothing had been done to fill the hole that stretched from 2010 to 2017. We now had to do two things – first confirm that the archive books for those years existed and then locate them. Both these things were easily done by getting in touch with former members of Southampton SSAGO. After many conversations and a fair amount of coordination, two large archive books were brought to Southampton by the end of February.

These archive books were not as detailed or as extensive as the ones from fifty years ago but they did fill up most of the holes in Southampton SSAGO’s history. The books also contained quite a few assorted souvenirs – postcards, paper plate awards, photographs, booklets, bits of SSAGO notices and all sorts of other things. It was at this point that Oli Bills and I decided that it would be a good idea to classify and digitise all this and then add these books to the main archive. We discussed our ideas over lunch and put the plan to the committee who were quite happy to agree.

From then on, the old archive books were brought out and discussed every week when SSAGO met at the pub. We learnt all about SSAGO Saga - the SSAGO board game and about how our mascot Phillippa entered our lives. Gradually, the stories behind the souvenirs and photographs hidden in the books emerged. In the meantime, I spent several days with the archivists at the university and learnt a few more preservation techniques. Eventually, we found ourselves in a position to be able to pin dates and contexts to almost everything in our archive books.

The next several weeks saw us engaged in pitched battle with the scanners. We managed to scan everything (eventually) and though the scanners were at their uncooperative best (worst), we even managed to have fun as you can see from our smiles in the photograph! Finally, in early July, the books and their contents were added to the main archives at Hartley library. The number of holes in Southampton SSAGO’s history has gone down drastically. And while we still have a long way to go, Southampton SSAGO has taken its first steps to a proper digital archive.